Myers moved to Fountain Inn from Mt. Olive, North Carolina with Sonoco Company, where he also volunteered with the Mt. Olive Fire Dept. from 1978 -1979. In 1992, he joined Fountain Inn’s fire department as a volunteer, becoming full-time July of 1996 and assistant fire chief in 2007. In addition to his numerous fire certifications, he is certified as Fire Marshall which he received in 1999.

Chief Myers said, “The goal of the Fountain Inn Fire Dept. has always been to take care of people. It is something we believe we do well, and it is our hope to continue to provide the top level care and security the community has come to enjoy.”

At the July 12th Council meeting, Fountain Inn City Council recognized Lt. Michael Knotts, Engineer Jason Crist, Fire Fighter Bryton Cromer, Fire Fighter Tyler Barrett and Assistant Fire Chief Russell Alexander for lifesaving resuscitation efforts that occurred over the past year. Each recipient was presented a certificate and a pin. Statistically in cardiac arrest situations, a patient may end up with permanent physical deficits or may not survive. The qualifying significance of this award is that each patient not only survived cardiac arrest but was also discharged from the hospital under their own power with zero physical or neurological defects.

The mission of the Fountain Inn Fire Department is to provide the highest level of public safety services to our community.  We protect lives and property through fire suppression, emergency medical response, disaster management, fire prevention and public education. 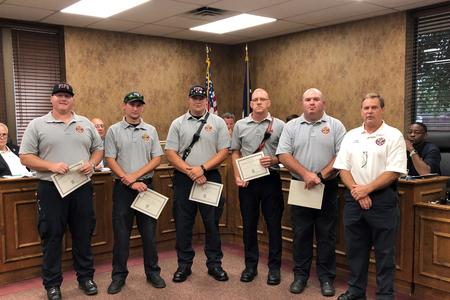 The Fountain Inn Fire Department can trace its roots to 1933. Then a volunteer organization, the record of service in the early part of the 20th century is remembered with great respect.

The current Fire Department has evolved to meet the needs of a growing community. The department is a combination of 23 paid Firefighters, EMT's, and Paramedics, 5 Part-time, and 1 Volunteer. The Department works out of its headquarters station behind City Hall on Main Street and one substation.  Our substation is located on Jenkins Bridge Road They provide full-time protection for the city and fire service area of Greenville and Laurens Counties.